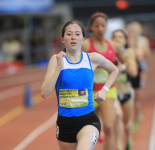 Across the country the Mile heated up during the 2012 High School Indoor season. According to ESPN / Dyestat's Elite Rankings, which go back to 1999, it was in fact one of the fastest years with the most girls running sub-4:50 (14) and boys running sub-4:10 (6). With less than a month to go until the Arcadia Invitational in Southern California on April 6-7, get to know who will be lighting up tracks near you this Outdoor season with our Bring Back the Mile 2012 High School Indoor recap.

BOYS
6 boys went sub 4:10 with a total of 18 under 4:15 during the 2012 season. While Edward Cheserek (St. Benedict's Prep, NJ - JR) stole most of the headlines and led the country with his 4:02.21 at the New Balance Games in New York, Brad Nye (Davis, UT - SR) kept things interesting by racing to the wire and grabbing the national title at the New Balance Indoor Nationals.