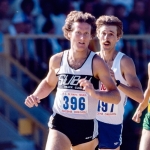 As a freshman member of the Upland, Calif. high school track team, Steve Scott savored the pleasures of life in the slow lane. “I didn’t run at all during the summer,” he recalls, “so my mother started running to make me feel obligated. She’d go out in the morning and come back all dripping wet, saying she’d just done four miles herself. I’d say, ‘That’s good,’ roll over and go back to sleep.”

Scott, now 25, hasn’t needed much prodding lately. This summer he became the fastest Miler in American history, clocking a 3:49.68—and slicing 1.42 seconds off legend Jim Ryun’s 14-year-old record. Yet Scott is still more than two seconds short of Sebastian Coe’s world mark of 3:47.33, set during a frenzied two-week period last month when Coe and his fellow Briton Steve Ovett traded possession of the record three times. In fact, Scott has labored all season in the shadow of his two British rivals. When he set his U.S. record in Oslo last July, he could finish no better than Ovett. A few weeks later he set a new U.S. record for the 1500 meters—but on the same day as Ovett’s world record Mile. Three days after that Coe shattered Ovett’s record in Brussels, while Scott once again ran attendance in third. A lesser competitor might be discouraged, but Scott does not have the soul of an also-ran. “You can beat him nine times in a row,” says his coach Len Miller, “but he isn’t going to concede a thing when he comes to the line the 10th time.”

Though the outdoor track season is nearly over for 1981, Steve will get one last shot at Ovett this week in New York, when both will compete in the first Pepsi Challenge Fifth Avenue Mile. No recognized record is possible, since the race will not be run on a track with turns, but Scott is pleased to have the home track advantage for once. “When I set the American record in Oslo,” he recalls ruefully, “my friends were happy for me, but it just wasn’t the same. If I was in America, I probably would have been mobbed.”

An unambitious student in high school, Steve went on to attend the University of California at Irvine, where he majored in social ecology, and annoyed his father, a doctor, by an overall lack of commitment. Then, unexpectedly, Scott began to take his running more seriously.