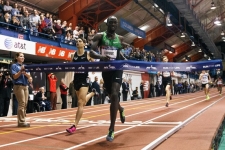 Despite move uptown, Millrose Games centerpiece has retained its cachet

To compete with world class runners, and to win.

Those are Bronxville highschool senior Mary Cain's goals for her second appearance in the women's Wanamaker Mile at Saturday's 107th NYRR Millrose Games. The 17-year-old track phenom is the poster child for a resurgence in U.S. middle-distance running, such that this year's fields in the Wanamaker are mostly American and world-class.

Cain is but the latest in a historical parade of stars to build their legacies in the sparkling centerpiece of the Millrose Games. The Wanamaker Mile brings together an explosive mix of top competitors and inimitable New York atmosphere, and after more than a century it still reigns as the world's most iconic Mile race.

But its kingdom—indoor track—is in flux, and like a savvy Miler, Millrose Games directors have had to react to changes in the sport. In 2012, after 97 years at Madison Square Garden, they moved the event to the Armory in Washington Heights in an effort to keep the best runners coming back.

"Every young Miler dreams of running the Wanamaker Mile," said Millrose Games director Ray Flynn, who competed in the Mile race six times and was an Irish Olympian. "But any event that's 107 years old has to evolve to remain relevant and extend its legacy into the future. Now athletes want fast times."