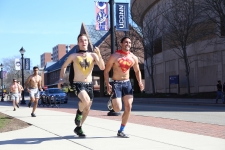 “It’s a great way to express yourself. No one’s being judgmental – it’s goofy fun.”

Student organization UConn Empower ran the event. The Underwear Mile is a fundraiser to help communities in developing countries. Students register and donate to run. This year’s money will go to a community in the Dominican Republic. UConn Empower also sold Underwear Run tank tops to boost funds.

“It’s becoming a UConn tradition,” said Amber Dickey, an eighth-semester Spanish major and president of UConn Empower. “I’ve been with [the run] from the start. It really helps promote body positivity. People show off their underwear and costumes.”