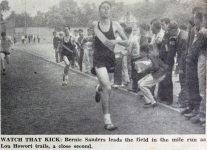 This was only a few years after Roger Bannister became the first to beat the 4 minute Mile, and running had captured the nation's attention.

Judges at the high school cross-country competition in the Bronx's Van Cortlandt Park had a problem.

Joe and Clarence Scott, the 16-year-old twin seniors from Brooklyn Automotive High School, crossed the finish line of the two-and-a-half Mile race that drizzly, cold November day in first place -- simultaneously. Holding hands. The pair were among the top runners in their age group in the city in 1958, often winning or finishing near the top of the standings in distance events.

But the Scotts' unusual finish was a violation of the rules, since it implied that they'd colluded on the ending.

Distance running, even at that level, was a big deal. This was only a few years after Roger Bannister became the first to beat the 4 minute Mile, and running had captured the nation's attention. The New York Times ran front-page articles about professional runners shaving a few seconds off one another's time. In this case, the judges -- not wanting to reject the results (the pair had won by a wide margin) -- declared Joe the winner and Clarence second, with identical times. The whole situation was interesting enough to itself warrant an item in the Times, titled, "Identical Twins Finish Together But School Judges Pick Winner."