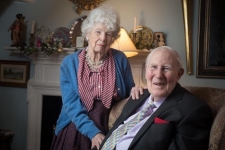 "I would hope that my colleagues with whom I worked in hospitals for 25 years will appreciate the honor, as well as those who were in the world of running.”

By Luke Sproule, The Oxford Times

Sir Roger Bannister, celebrated neurologist and the first man to run a Mile in less than 4 minutes, has had his achievements recognized with yet another honor.

The 87-year-old from North Oxford was made a Companion of Honor in the New Year’s Honors List – becoming one of just 54 living people to be so honored.

Sir Roger, who is also a CBE, said he was thrilled. “I have always been astonishingly lucky in my career, which has encompassed both sport and neurology. I never anticipated or predicted or wished particularly for a further honor but I am delighted to receive this.”

Sir Roger was made a Companion of Honor for services to sport, including his time as the first chairman of the Sports Council – now called Sport England.