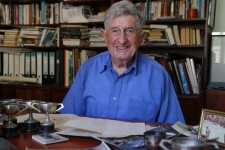 "I've had a wonderful life. Not complaining. And I hope it hasn't ended yet."

Sporting greats, African dictators and John Wayne — Cecil Walkley has packed plenty in to his 88 years. And running — lots of running.

These days, the dedicated middle-distance runner still pounds the track in suburban Perth every Thursday night, at the Ern Clark Athletics Center in Cannington.

"It's exhilarating. I think that's the right word to use," he says.

But years ago, at the peak of his career, the former doctor ran against one of the greats — sub-4 minute Mile record breaker Sir Roger Bannister, who died two weeks ago.

"I started curiously enough when I was in Egypt at the age of 10," Dr. Walkley says.

A life forged in war
Born at a Hill Station in Murree, Pakistan to British parents, Dr. Walkley's childhood was shaped by war.

His father, a quartermaster in the Royal Army Medical Corps, was posted to Egypt in 1938, taking his young family with him.

They were evacuated with other families to South Africa a few years later, before returning to England on a troop carrier.

"We got bombed several times in the Mediterranean," Dr. Walkley recalls.

"Then when I got back to Britain, I was sent off to boarding school."