I first met Dave Wottle as a 15-year-old making a trip to the Ohio JC Summer State Meet in Canton, Ohio. I had qualified for the event with my fastest Mile of 4:28 at a regional meet. I don’t know how I knew but there was a lanky guy sitting cross legged in the shade next to the field house, worried he’d be my competition, I asked him, “You a Miler?” “Yes I am, but I’m not running today.” In the extended conversation I learned I was talking with the present Ohio State HS Mile champion and that he had run it in 4:20 flat and that his name was Dave Wottle. Dave had grown up just across the street and was there just soaking in a track meet for us youngsters. I do remember his modesty in relaying the information and it made a lasting impression on me. “Wow, the State Mile champion!” Our paths would cross again 2 years later in a very big way.

As a high school senior in 1970, I came in third in the Ohio HS State Meet with a 4:16.4. While I was undefeated before that meet in NW Ohio, I was now getting calls and letters from colleges and universities all around the Midwest. I always thought of going away to college and didn’t consider Bowling Green State University, only 13 miles down Rte. 25 to be ‘away’.

BGSU Coach Mel Brodt came to our home one hot summer day and sat down with me, my Mom & Dad. I remember him saying, “Rick, you have a chance here to be a part of something very special at BGSU.” I knew of Sid Sink and Dave Wottle. Dave had just broken 4 minutes for the first time (one of his top 3 career highlights) and Sid seemed to win every event from the steeple chase to the 6 Mile. With a friend and competitor from The Toledo Road Runners, Steve Danforth just completing his freshman year there, a decision was made. I’d report to BGSU for Cross Country three weeks before classes started.

I was mostly a lone runner in high school with the exception of Jim Haxton, a good friend and runner who would go on to run at Ohio University. When Coach Brodt said I’d be part of something special, I had no idea. At our first practice, I looked around and was unable to count the number of guys coming out for Cross Country. There was more than 80 guys lacing up their shoes. I had received a little press on being the fastest high school Miler ever recruited to BGSU but then I learned among all these new guys was a New Yorker who had been in Sports Illustrated’s ‘Faces in the Crowd’, Craig MacDonald, the New York State Cross Country champion. I remember thinking, “This is going to be a challenge keeping up” and indeed it was.

The Essence of a Competitor
Our track workouts would start with a 3 Mile run at what Coach Brodt described as “at ease”. The next thing we’d do is what he called, “pick-ups”. Usually a bit over a hundred yards, we start out at a good clip and continue to gather speed and ending in a sprint. As the new guy on the block, I’d show these guys my speed. I know Dave was used to being in the lead at the end of these but I would best him here. I know he did not like this, he’d keep coming at me and we’d continue this little race daily. Turned out it’s the only thing on the track I’d ever best him in.

Sid Sink was our leader. He would assume taking the pace at whatever Coach Brodt wanted. 5 minute Mile pace, no problem, 4:45 same, Sid would be right on it and we’d fall in behind. Knowing pace was something we’d all have to learn. Inevitably, Dave would go charging into the lead at the end. It’s what he did. He did not always go without a challenge but we’d knew it would happen every time.

BGSU lies in the Black Swamp. Early American settlers would have a hard time getting around it, let alone through it. When it was drained and cleared of trees, it became some of the best farm land in the country. Ditches in the countryside can be 10 to 15 feet deep but the land up top is so flat you are able to view the curvature of earth just as if you are miles out in the ocean. This geographic feature results in wind, almost constant wind. In winter* and spring, the wind was a daily battle on the track which had no protection unless you call the 3 foot arborvitae outside the fence “protection”.

One of Coach Brodt’s favorite workouts was 3 x 2 Miles with exactly five minutes rest between. A 3 Mile warm up before and a 3 Mile warm down after. We got to look forward to this workout because of the challenge it presented. The first 2 Mile was to be 10 minutes, second 9:30 and the last to be 9 flat for all that could make it. Normally, this is exactly what we did with Sid keeping the pace right on the money. On one windy Monday in 1972, the competitive juices must have been flowing through us all. If I am recalling this correctly and not embellishing, the first 2 Mile was completed in around 9:35, Coach smiled and did not reprimand us for not staying on pace. During the 5 minute rest period, Sid pleaded for someone else to go to the front and assume some of the wind breaking duties. Craig MacDonald, Steve Danforth and Tracy Elliot helped Sid during the second 2 Mile which most of us completed in just over 9 minutes. I don’t recall if I helped, probably not, but Dave was there in the pack only to come home first in 8:50 something. Not much was said during the next 5 minutes as we wer 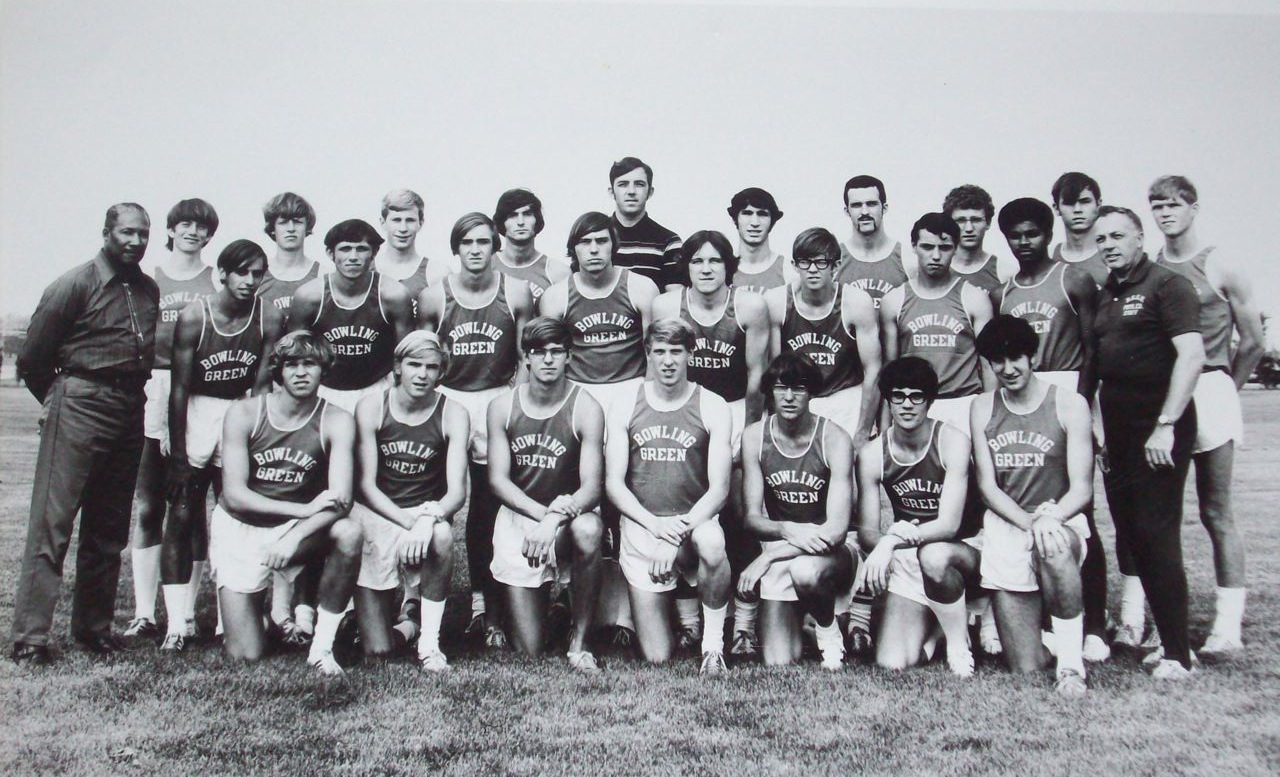 e busy sucking in air. As we set out on our third and last 2 Mile, some of the guys started giving Dave grief on his drafting methods, we all joined in. Maybe a bit miffed, he takes to the lead and we all follow on or try anyway. “Dave! You’re supposed to be leading the way, not blowing us off the track”. Well, he did, he completed that third 2 Mile in 8:29. 50-60 yards back, I would run the fastest 2 Mile of my life, in practice, dang. A couple weeks later, Dave would win the 880, Sid the 2 Mile and our Distance Medley relay took the title as our team would place second at the NCAA Indoor Championships giving BGSU a team tie with Michigan State.

Mixing Marriage and Olympics
Dave’s competitive nature spilled over into everything, leisure activities too. Whether we were playing ping pong, pin ball, bowling or whatever, he was doing his best to come out on top and usually did. One thing Dave was not real good at was girls. Shy did not come close to describing him at that time. Me, I considered myself one of the best wing guys around. And there was Jan, available, having split up with another teammate many months before, beautiful, lovely and lively. Timing seemed right, I had to get these two together but I couldn’t do it without Dave’s help. He only had to ask her out. It took a couple weeks of jabbing for him to get up the nerve but eventually he did and that was all it took. They fell in love and how does a marriage in between the Trials and the Olympics hurt? Hey, there was a few weeks of a window. A wedding was planned and I was honored to be their Best Man. The experts said it was a bad idea and it would ruin his chances but love always finds a way or this instance, to not get in the way.

Munich 1972
It’s really hard to say that Dave’s best event was the Mile seeing as he tied the world record in the 800 at the Trials and then won the Gold in Munich, Germany. I still maintain that it was. The Mile is contended in ways where the winner is not always the fastest and strongest competitor in the field. It comes down to the guy that wants it the most, whether it is a blistering pace from the gun or a stroll in the park until the bell is ringing. Knowing what you have in the tank on that day determines how you approach it. Don’t get me wrong, Dave was strong and obviously fast. He could bench press 300 pounds with those seemingly skinny arms and a 47 second flat open quarter is not too shabby. Not known as a Cross Country runner but check the books. As I recall a couple top 10 finishes at the NCAA Cross Country Championships, running 6 Mile times over hill-and-dale most anyone would be proud of on the track. [EDITOR's NOTE: memory is an elusive thing at times, Dave Wottle did finish 12th at the 1971 NCAA XC Championships and was on two teams that placed in the top 10.] But he was a Miler who also won three NCAA titles (1500 – 1972 and Mile, indoor & outdoor – 1973). I believe if the Olympic schedule called for the 1500 to be run before the 800 he would have won the 1500 and who knows how he’d then fare in the 800. As a 21-year-old with just a little international experience, the limelight of the 800 gold medal blinded him to the rest of the job. He just plain went to sleep in his 1500 semi heat.

After the Olympics, in 1973, Dave did become the second fastest American and #3 individual all-time in the Mile with Steve Prefontaine doing his pace work. He clocked a swift 3:53.3, and Jim Ryun’s world record 3:51.1 was the only American time faster, while Pre ran a 3:54.6, his PR, so all I’m saying had Pre run 3:52, well, I guess you know where I’m going here. Dave was a Miler and rarely lost one in his time.

Final Thoughts
Dave Wottle was really a Miler who happened to be also really good over two laps, but he is so much more that. Dave is great and humble guy, loving husband to Jan, and father of three successful kids, Scott, Mike and Jenny. He is also a very talented motivational speaker to high school coaches and athletes. Now that he’s retired from his Director of Admissions position at Rhodes College, he has lots of time for talking.

*BGSU had no indoor track, we ran outdoors all year long. We once ran Coach Brodt’s featured workout at 5 degrees above zero Fahrenheit. (That is -15 Celsius for our metric friends.)