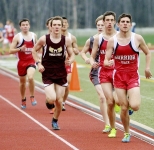 The success he’s had in the Mile seems to have lit a fire within Zach LeMay, who said he now has a chance to eclipse a mark set my one of his older brothers.

The last name of LeMay brings with it high expectations when it comes to Edgewood running.

Considering all the success those two had, younger brother Zach had to deal with the pressure of being a LeMay, especially since the twins graduated last spring. Talking to his coach Jim Sanchez, Zach learned long ago to not force himself to be like his older brothers.