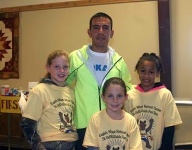 “Leo is the right athlete for HOKA ONE ONE because he believes in our footwear."

BURNET, Texas — When they’re young, people say they put on the fastest shoes in the world.

For 2004 Marble Falls High School graduate Leo Manzano, those shoes also helped him to stay on the track.

Manzano was the featured speaker at the unBearable Fun! Run benefitting the Eagle’s Wings Retreat Center on Dec. 6.

The 2012 Olympic silver medalist in the men’s 1500 meters thought about retiring after the London games. Negotiations broke down with Nike, his sponsor since he turned pro in 2008.

According to reports, the company and Manzano could not reach an agreement on compensation.

So the former Texas Longhorn made the decision to keep running, even if it meant paying his own expenses by using his savings. He created Leo the Lion t-shirts that he sold through social media to help fund his training.

He recalls being in Europe to compete during the season months ago as his savings was being used.

“It was the hardest year I’d ever gone through,” he said. “I was going to be out of the sport. HOKA ONE ONE came to my rescue.”