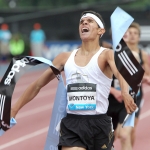 "The fire is still growing inside, and I still want to prove myself. I’m more driven than in high school."

In the long run, Bernie Montoya might be better off for not breaking the four-minute Mile barrier while in high school.

Still Montoya’s 4:01.32 at the 2012 adidas Dream Mile is third fastest all-time in a race with only high-schoolers so it’s hard to keep a lid on expectations even at ASU, where middle/distance running flies way under the radar compared to Oregon, Colorado or some Eastern schools. It’s entirely possible, though, that Montoya eventually will topple the fabled school track records — 3:56.90 Mile and 3:40.70 1500 meter — set by Chuck LaBenz in 1970.

“You want to be grateful for what you have,” said Montoya, who never expected to run 4:01 when he was a freshman at Yuma Cibola High. “In the end, I’m very satisfied with my (high school) career. The fire is still growing inside, and I still want to prove myself. I’m more driven than in high school. I have to be if I want to stay up with those big dogs.”