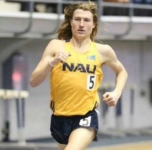 Theo Quax continues to follow in the footsteps of his famous father on the athletics track, with the Kiwi youngster joining his dad in an exclusive club this past Saturday.

Quax's PR for the distance ranks him 11th for U.S collegians.

He and Dick now become New Zealand's first father-son combination to record sub-4 Mile times and the 12th globally to have knocked off the special feat.

Fellow Kiwi college athlete and hot young prospect Sam Tanner (Washington) also featured in the same Mile, and looked well on pace for a sub-4 finish before he tripped with 200 meters remaining.

Quax did well to avoid the fallout from that tumble.

"We've got a good relationship with a few key schools in the U.S. and it's paying off," he told Stuff. "It often takes a while for these guys to transition, but it's a great way for some athletes to really develop their careers."