Why shouldn’t the Olympics go the extra mile? 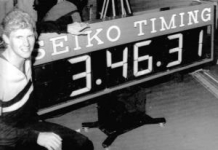 By Mike Rowbottom, Inside the Games

...But what I heard next was a question addressed to Cram of, thankfully a more conventional nature, asking merely what had been the highlight of his athletic career.

Cram's highlight came in his annus mirabilis of 1985, in the Oslo Dream Mile, an event that carries its own fabled associations in just the same manner as the Wimbledon or FA Cup final.