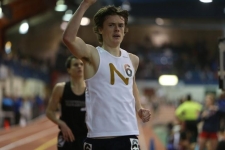 The 17-year-old junior from Northport, N.Y., diagnosed with autism as a toddler, is qualified for the New Balance Boys Mile at the Millrose Games on Saturday. Last fall he was second at the New York Class A cross country championship and then won the NXN New York regional.

By next fall he could be one of the top 10 high school runners in the nation, and yes, that makes him a top-shelf college recruit.

There is a tendency to look at what "Mikey" has done – like running 38 minutes for a 10K road race at age 12 -- and wonder aloud if he is a one-of-a-kind athletic talent who happens to have autism. Steve Cuomo, the coach of Rolling Thunder Special Needs Program on Long Island, doesn't buy it.

"Mikey is not the abnorm as an athlete with autism," Cuomo said. "The reason you haven't seen it before is that we never gave anyone (with autism) a chance."