Michael Glen, the monarch of the Mile 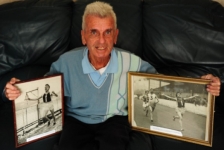 By Jack Davidson, The Scotsman

Michael Glen is Bathgate born and bred and lives there in a street called Race Road. For the former world professional Mile record holder it could hardly be more fittingly named.

In a running career that spanned 26 years, Glen competed in thousands of races on track and over hill and was the “king” of professional middle distance running. So much did he dominate that, at his peak, he often had to start 30 yards behind the scratch mark to offer some hope to his rivals.

Now a sprightly 80-year-old old, despite the legacy of arthritis and knee and hip replacements from his running days, his enthusiasm still burns brightly as he recalls his career.

His “day of days” was at the Keswick Games in the Lake District when he set a new world and British professional Mile record on grass. “That Bank Holiday meeting was a big event, part of the annual Keswick Show in Fitz Park in the town. Professional running was very popular in the Lake District and had a long tradition. There must have been over 20.000 people there that day – a great atmosphere!

“The grass track was just laid out for that event and had a slight rise towards the finishing line. I hadn’t set out specifically to beat the record but I’d been in good form. I was the backmarker off scratch conceding handicaps up to 250 yards to my 25 or so fellow competitors. I threaded my way through the field and crossed the line in 4 minutes, 7 seconds to set a new world and British record, beating the legendary Walter George’s mark of 4:12 set back in 1886.”

The obstacles posed by so many rivals and the deficiencies of a rudimentary grass track surely detracted from his performance?

“I reckon if it had been a proper track with a limited field of quality runners, including a pacemaker, I could have got the time down to about 4:02 or 3.”

Nowadays, when 4-minute Miles come along as often as buses, that might not seem particularly noteworthy. But, set in the context of its time, it was a tremendous achievement. Roger Bannister’s iconic 4-minute Mile had been run only 15 months previously with the help of certain advantages denied to Michael. His was achieved on a carefully prepared cinder track, aided by two [strictly illegal then] accomplished pacemakers – Chris Brasher, later Olympic gold medalist at steeplechase, and Chris Chataway, later world record holder at 5000 meters – as part of a race, with no more than six runners which was deliberately set up as an attempt on the 4-minute Mile.

Nor had Michael spent the morning of his race machine-grinding his spikes to a fine point to extract every advantage as Bannister did.