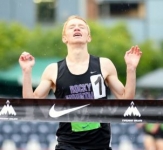 "The backstretch was just completely lined up with people screaming. It definitely was a lot of adrenaline. It was awesome.”

By Jerry Ulmer, The Oregonian / OregonLive

By the time Michael Slagowski hit the last lap in the elite Mile at the Jesuit Twilight Relays on Friday night, he was running on fumes.

But the senior from Rocky Mountain High School in Meridian, Idaho, also was face-to-face with the Holy Grail for distance runners: the sub-4 minute Mile.

“My legs were burning, and I was already super tired,” Slagowski said. “I just kind of forgot about it. The backstretch was just completely lined up with people screaming. It definitely was a lot of adrenaline. It was awesome.”

The Penn State-bound Slagowski didn’t disappoint the crowd, finishing in 3:59.53 to become the 9th U.S. high school runner ever to break the coveted 4 minute barrier, and only the third in a high school-only meet. It was a stunning performance by Slagowski, who shaved six seconds off the personal best that he set April 16 at the Pasco Invitational.

"It wasn't really on my mind to do it this meet until I ran the 4:05 at Pasco two weeks ago," he said. "I was hoping to get into a pro race later in the season, and have a good shot at doing it there. But after I ran that 4:05, I just thought for sure that I could put up a fight for it here."

Said Rocky Mountain distance coach Bob Hays: “It rained all day long and we were questionable if he could pull it off, but he did.”

Senior Jack Yearian of Bellarmine Prep (Wash.) ran a strong 4:06.33 in finishing second, but was far behind the streaking Slagowski. West Linn senior Roman Ollar was the top Oregon runner, placing fourth in 4:11.00.

"I was really confident," Slagowski said. "I hadn't been feeling very good a few days earlier, but today I woke up and I was feeling great… I could tell by my workouts that I could at least get really close. That was definitely my goal."