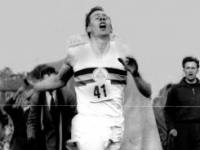 But in 1954 all sports stories were overshadowed by what happened on a track in England on May 6.

Imagine a sports landscape ruled by baseball, where college football is more popular than the National Football League, horse racing and boxing draw bigger interest than either pro or college basketball and the year’s signature athletic achievement takes place on a track in Oxford, England.

There are as many major league teams in upstate New York as on the entire West Coast and only two franchises west of St. Louis. There are two big league baseball clubs in Philadelphia, two NFL teams in Chicago and NBA franchises in Syracuse, Rochester and Fort Wayne, Indiana. There are no major league sports in Miami, Atlanta, Dallas, Houston, Denver or Seattle.

Such was the state of athletics when Sports Illustrated printed its first edition 60 years ago on Aug. 16, 1954. Legends Joe DiMaggio, Joe Louis, Sammy Baugh and Bob Mathias were recently retired. Contemporary champions Rocky Marciano, George Mikan and Otto Graham soon would join them on the sidelines.

A Mile to remember for the ages
But in 1954 all sports stories were overshadowed by what happened on that track in England on May 6. For years breaking 4 minutes in the Mile run had been the most elusive of athletic barriers. The world record had been lowered gradually with Sweden’s Gunder Hägg running 4:01.4 in 1945.

The record stood for nine years. Some theorized that man was physically incapable of running a Mile under 4 minutes, that a runner’s heart and lungs literally would burst if he attempted such a feat. A 25-year-old English medical student knew different. Roger Bannister understood that proper training and conditioning brought the 4 minute Mile into the realm of not just the possible but the probable. Under the guidance of trainer Franz Stampfl, Bannister had set a British Mile record of 4:03.6 on May 2, 1953.

One year and four days later he was ready. After spending the morning making his rounds at a London hospital, Bannister took a train to the Iffey Road Track in Oxford to compete in the Oxford University vs. British AAA dual meet. The Mile would be broadcast live on BBC Radio with former Olympic 100 meter champion Harold Abrahams of Chariots of Fire fame serving as commentator.