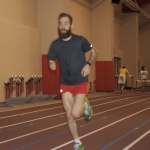 "I hit the line at 3:59, saw my official time and had a feeling somewhere between elation and relief I’d say."

Jake Edwards has been chasing things his whole life.

He’s caught up to most of them, whether it be an OHSAA Division I State Championship in the 1600 meter run or a track scholarship to The Ohio State University, but there was one thing that eluded him for quite some time … key word being was.

The former Delaware Hayes standout successful ran a Mile in under four minutes early last month — something many thought to be impossible at one time — checking off a dream he’s been running toward for years. Edwards posted a mark of 3:59.47 in the one-Mile run during the Midwest Indoor Track & Field Open, hosted by The SPIRE Institute in Geneva, back on Feb. 1 — an effort even he didn’t see coming.

“I ran in a couple smaller meets leading up to the event and neither were fantastic,” Edwards said. “They were just kind of to blow off some steam. I went into it (SPIRE) not knowing I could do it, but the race itself was set up to go under four.”