Harrisburg Mile ‘has something for everyone,’ from kids to elite runners 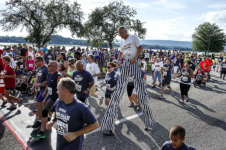 "The Mile is a unique event. It is a race event that has something for everyone. We have participants that walk a Mile during the fun run/walk, elite runners in the elite heat, and everything in between."

By Kelly Leighton, The Patriot News

The First National Bank Harrisburg Mile is set to take over Front Street in Harrisburg on Wednesday, July 15, as runners of all ages and abilities participate in the community event.

Runners line up just before Maclay Street and walk, jog and sprint the Mile race until hitting the finish line, right near Boas Street.

The race, in its 34th year, has a new title sponsor this year with First National Bank taking over.

"We are really excited to have them be a part of the event," said Tom Gifford, race director. "Capital BlueCross is also the race series sponsor, so this is their first year being a part of all our races."

Gifford expects at least 1,500 participants, if not more, including more than 100 corporate teams in the WINK 104 corporate challenge. Teams consist of five members, but teams of three or four runners are allowed, just not applicable for awards.