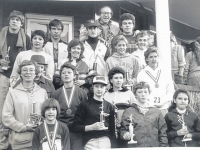 “A few years after I started the Green Ridge Mile, I did ban smoking in Gavin’s", wondering if “that might have been a first in the state.”

SCRANTON — Daniel McGlynn was that rare tavern owner who had a habit of running to work every day.

His house was “exactly one Mile” away from Andy Gavin’s Tavern, which he owned and operated from the late 1970s to 1988, and jogging that Mile seemed like a perfect way to make exercise a part of his day.

“One night I came in after one of my runs and I casually made a comment to one of the beer salesmen sitting in the bar that I should start a race through Green Ridge, finishing up at the bar.”

Almost as soon as he said it, McGlynn realized it was a good idea.

The Green Ridge Mile, now billed as Lackawanna County’s oldest continuously held race, has been held every Thanksgiving weekend since 1981 in the Green Ridge section of Scranton, ending at the tavern on North Washington Avenue.

McGlynn recently came across photographs from the inaugural event when he was “going through boxes I haven’t opened in 25 years.”

The first race featured three divisions: a fast one for high school and college athletes and other runners between ages 16 and 30, a Masters division for older runners, and an Open race for children and walkers.