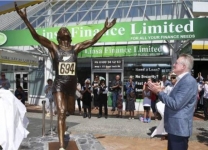 One of the country's sporting heroes has been immortalized in his hometown.

The statue, designed by sculptor Joanne Sullivan, depicts the moment Walker crossed the finish line at the 1976 Montreal Olympics, where he won gold in the 1500 meters.

It faces his old primary, Manurewa Central School, and the statue was funded by the Sir John Walker Legacy Trust and cost about $160,000 (NZD).

Walker said in 2017 he was surprised when he first learned a statue would be erected in his honor.

"It came as a big shock because normally you're dead [when a statue is erected]," he said.

The following year, he also set the world record for the 2000 meters.

Later, he was elected a Manukau City councillor, and now represents the Manurewa-Papakura ward on Auckland Council.

The 66-year-old, who suffers from Parkinson's disease, was appointed Knight Companion of the New Zealand Order of Merit in 2009.