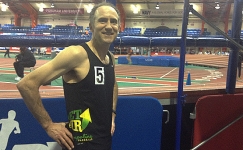 Brad Barton's son, a Division I collegiate runner, made the mistake of calling his dad an "old man."

Barton, once an All-American in the steeplechase at Weber State University in Utah, told him, "When you beat me in the Mile, you can call me an old man."

Well, dad has made it a lot tougher for his son. Running in the Mile at the Columbia Final Qualifier on Saturday night at The Armory, Barton ran an age-group world record 4:16.84. Afterward he said, "I didn't think I could run that fast."