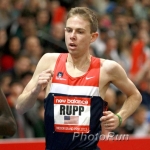 Galen Rupp of the Nike Oregon Project has targeted the world record for the indoor Mile at Boston University on Feb. 15 according to his coach Alberto Salazar.

The U.S. record of 3:49.89, held by Bernard Lagat since 2005, also is in play. But the thinking inside the Oregon Project, Salazar said, is why not aim high?

"I can't predict Galen will break the world record, but we're not going to put all that work out there for 3:49," Salazar said. "He might as well go for it."