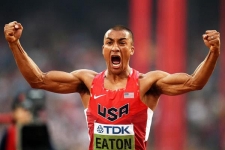 The discipline's world record holder, who does not train for the 1500m, savors the final event as he knows it's the most exciting for the fans, and it's the most nail-biting to experience.

EUGENE, Ore. -- Later this week, Ashton Eaton will once again compete at historic Hayward Field in front of his home crowd seeking his second Olympic Team berth. The reigning decathlon Olympic gold medalist, world record holder and arguably the most prominent Oregon alum will have his work cut out for him, the clear favorite in the event despite returning from a nagging quad tear.

At a press conference in advance of the start of the Olympic Trials, Eaton met with the media and covered a wide range of topics, from his bond with coach Harry Marra to the pressure that comes with being the world's greatest athlete. Yet Race Results Weekly dug a bit deeper to learn about Eaton's relationship with the decathlon's tenth and final discipline: the 1500 meters (metric Mile).

By far the longest and most grueling of the ten events, the 1500m is the race that brings out the glory and strength in decathletes. It's also the event in which Eaton has achieved the most magnificence: his runs at the 2012 Olympic Trials and 2015 IAAF World Championships -- where he set a pair of world records -- are etched in the minds of many track fans.

Here are five things RRW learned about Eaton today, all of which are tied to the 1500m:

1) Eaton does not train for the 1500m; he simply uses his God-given talents to reach the finish line. Under Marra, Eaton fine tunes all of the other nine events that make up the decathlon. But when it comes to the 1500m, it's just toe the line and go.

"No, no," he said defiantly when asked whether he trains specifically for the event. He added a hearty laugh at the thought of putting in miles.

2) Eaton's first time experiencing the famed “Magic of Hayward Field”came during a 1500m, in particular the 2012 Olympic Trials decathlon.

With two events remaining in the competition, Marra hinted that the world record was within Eaton's grasp. Bearing down and focusing even more, Eaton threw the javelin 61.96 meters then toed the line for 1500m.

Racing at record pace, the Hayward Field faithful grew louder and louder as Eaton completed the first three laps. In the final circuit the volume was perhaps the loudest the stadium had ever been, according to attendees. With early leader Curtis Beach stepping aside and encouraging Eaton on, the latter wound up running a lifetime best 4:14.48 to set the world record mark of 9,039 points (breaking Roman Sebrle's 11-year-old mark of 9,026).

"When I was on the line there were only two options -- you either try to do it or don't try to do it. I thought 'Well I'm going to try and do it.' Running it, I was nervous for the first two laps and after that it was just obviously the crowd," he said. "I'd say that was the first time I felt what they call the Hayward Magic. Any other time before that I always felt some kind of energy from the crowd but nothing that actually made my running easier. That was a great experience."

3) Eaton savors the final event as he knows it's the most exciting for the fans, and it's the most nail-biting to be a part of. With point scores and positions on the line, anything and everything can happen over three and three quarters laps.

"The nature of the decathlon, it always comes down to the last event," he said. "It's just the nature of the event, it always comes down to the 1500m. In the 1500m, you watch us trudge along and it's like, 'Is he going to make it?' There's 30 seconds to a minute where you don't know what is going to happen as you are suffering down the straightaway."

4) On Saturday, July 2, Eaton will be featured on a bobblehead doll given to fans at the local Eugene Emeralds Minor League Baseball game. In case you were wondering, you'd have to round the bases of a baseball diamond 13.67 times to cover 1500 meters.

"I haven't actually seen it," he said trying to downplay the bobblehead, typically reserved for star athletes and celebrities. "I suppose it's cool. But at this stage I've been on a lot of stuff so it's just like, 'Oh, there's another thing.' If I had just done nothing and come out of college I'd be 'Why the heck am I on a bobblehead?'"

5) Eaton's relationship with Harry Marra is deeper than most, and that's what drives him to not let up in any event -- especially the final lap of a 1500m. The desire to win for his coach carried him to the world record both in 2012 and 2015 (when he scored 9,045 points in Beijing and eclipsed his previous record by the slimmest of margins).

"It was emotional [after setting the world record]. I think as an athlete, it's always nice to be able to --especially with a coach who is so dedicated -- be able to give them a good performance, to have them know that they coached something good," said Eaton. "For Harry, who's again dedicated his whole life to this event, I thought it was really cool for him to be able to say I coached the world record holder... Literally, like, none of us have ever dedicated as much to anything we've done as much as Harry because, for one, we're not as old," he said before laughing a bit.

Eaton hopes the 1500m is another memorable race on Sunday. Assuring media that his torn quad is recovered and ready to go, Eaton expects to be atop the podium and in Rio de Janeiro later this summer.

"My personal goals are higher than anyone else's," he said. "I would say there is more pressure in an Olympic year, simply because the Olympics weighs a lot as far as pressure is concerned. But you don't have very many options. You have two, and that's either give up or keep going. I just chose to keep going."