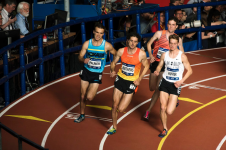 Drew Hunter broke his national high school indoor Mile record at the Millrose Games on Saturday in an event that proved to be as much a coronation ceremony as a race. With major cross country victories and another national record for the 3000 meters under his belt, he is now indisputably the top young distance runner in the United States and one of the fastest in history.

Competing in the Armory Invitational Mile, the undercard to the featured Wanamaker Mile, in a 12-man field containing collegiate and professional runners, Hunter, 18, a senior at Loudoun Valley High School in Virginia, finished in fourth in 3 minutes, 57.81 seconds, the first high school boy to clock two sub-4s indoors.

Hunter, 18, a lean but muscular presence whose easy, loping stride betrayed few signs of strain even at the end, ran a sensible race, settling into the middle of the pack early. He moved into fourth place in the third lap of the eight-lap race and maintained that position for much of the rest of the race, running fairly even quarter-mile splits before busting off a 57.4 over the last two laps.

Hunter has quickly become familiar with the lightning-fast track at the New Balance Track & Field Center at the Armory on 168th Street in Upper Manhattan. It is the same one on which he broke Alan Webb’s national indoor high school record in the Mile two weeks ago, running a 3:58.25.

Hunter raced despite dealing with a persistent cough that has kept him awake for hours at night. Wearing a jersey bearing the likeness of the distance legend Steve Prefontaine, he looked ecstatic after Saturday’s race.