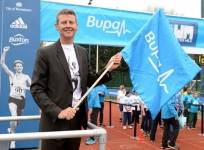 “The Mile is the perfect distance for any age and any ability.”

The third edition of the Bupa Westminster Mile on Sunday, May 24 will salute one of Britain’s greatest middle-distance runners as well as his Mile record.

Steve Cram broke the Mile world record in the Dream Mile in Oslo thirty years ago this July as part of a 19-day period in which he set three world records, with his Mile time of 3:46.32 still standing as a British record today.

The 2015 Bupa Westminster Mile will commemorate Cram’s Mile mark as runners of all ages – from elites to families with young children – contest a series of races in St James’s Park, starting on The Mall and finishing in front of Buckingham Palace.

To launch this year’s event, teams of London school children attempted to break Cram’s Mile record in a 100m shuttle relay at Paddington Recreation Ground on Wednesday, though his time remained unbroken.

“The Mile is the perfect distance for any age and any ability,” said Cram.