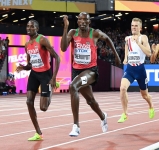 It seems wrong to describe Norway’s Jakob Ingebrigtsen as a wunderkind, because even though he only turned 19 on September 19, he has the attitude – and indeed competitive record – of a highly experienced senior athlete.

He won the European 1500m and 5000m titles in masterful style in Berlin last summer, and added continental 3000m gold and 1500m silver at this year’s European Indoor Championships in Glasgow.

And the youngest of the three Ingebrigtsen brothers who have adorned the track in recent years – Filip and Henrik preceded him as European 1500m champions – is unequivocal about his new ambitions. They’re global.

"I definitely hope that Team Ingebrigtsen can break the African dominance," he told the Norwegian daily Dagbladet in Berlin. "Filip has taken a step into that company with his 2017 World Championships medal, so we are on our way."

The late news that Kenya’s Elijah Manangoi will be unable to defend his title at the IAAF World Athletics Championships Doha 2019 after injuring an ankle in training has altered the complexion of the event – but it is still a fearsomely competitive one.

Manangoi’s younger brother George, born just over a month later than Ingebrigtsen, will carry the family name in Doha. He has a best of 3:31.49, as compared to Ingebrigtsen’s best of 3:30.16, set earlier this season at the IAAF Diamond League meeting in Lausanne. But he knows how to beat his young Norwegian rival, having taken 1500m gold ahead of him at last year’s IAAF World U20 Championships in Tampere.

Meanwhile Timothy Cheruiyot, the current world champion’s training partner, and the man who took silver behind him in London two years ago, remains the clear favourite for the title given his transcendent form in the past two years.

He heads the 2019 world list with the 3:28.77 he recorded in beating young Ingebrigtsen in Lausanne, and he is on a long winning run.