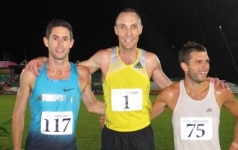 New Zealand's top modern Miler Nick Willis, running his first race for 2014, added to the rich history of Mile running in Wanganui, winning the feature race and running the 60th sub-4 minute Mile in the city.

The clock stopped for Willis at 3:55.98 as he ran his fourth sub-4 minute Mile in Wanganui to pull level with the legendary John Walker and Hamish Chistensen. The time was the 12th fastest Mile run at Cooks Gardens.

Willis, aiming this season for the Glasgow Commonwealth Games, ran behind the pacemaker for the first two laps, before heading out on his own with Malcolm Hicks and Matt Harris hanging on and a chasing bunch headed by Jono Jackson some way back. Hicks finished second, agonizing outside the magic mark in 4:00.12, while Harris faded in third.

The New Zealand 1500 meters record holder will race over 800 in Wellington on Friday before heading back to the U.S. to race indoors in Boston and New York on his way to the World Indoor Championships in Poland in early March.