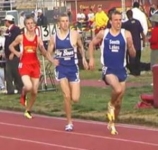 ARCADIA, Calif. - At the Arcadia Invitational on Saturday, Alan Webb was the talk of the meet, before and after, as the senior from Reston, Va. who last January became the first U.S. high schooler to break 4 minutes for the Mile in nearly 34 years, won the featured event, the boy’s Mile in a well-run 4:01.81.

Webb and challenger Ryan Hall of Big Bear, Calif., both wearing blue, held nothing back from the first lap (59 seconds) to the last one. Under cool, slightly breezy conditions, the duo hit three laps at 3:03 with Webb in front. Down the backstretch, Webb pushed the pace with Hall right behind. The crowd rose in anticipation of something special.

With 200 meters remaining, the Michigan-bound Webb put the hammer down and pulled away from a fading Hall. As Webb neared the finish line, all eyes were on the clock. Would he break 4 minutes? Not quite, but an impressive meet record performance nonetheless and also the second fastest Mile to-date at a U.S. high school-only competition (only Jim Ryun's 3:58.3 at the 1965 Kansas State Meet is faster).

Later in the evening, the Jefferson twins led their distance medley relay team to a victory in 9:57.88 (#3 all-time). Webb anchored his team to second (10:04.55), and although he made a run at it with a lap remaining, the seven second deficit he inherited at the exchange proved too large to overcome.