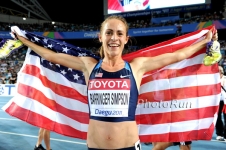 Jenny Simpson, the 1500 meter women's world champion, is known to some as the American steeplechase queen. Simpson is doing a few last-minute training tweaks as she gets ready for her Olympic trials race on Thursday. She's hoping to represent the U.S. in London in an event that isn't typically dominated by American women.