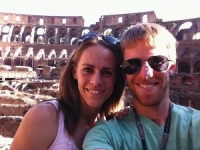 Running has taken Jason Simpson many places in life.

His most recent journey lands him in London for the 2012 Olympic Games. That is where he’s supporting his wife Jenny (Barringer) Simpson, a two-time Olympic qualifier.

Jason, a standout athlete in his own right during both his prep career at Liberty High School and college days at Truman State University, has had plenty of family cheering him on over the years. Ironically enough, he finds himself playing that role for his best friend these days.