Ray Flynn: Born to run and still in love with the sport 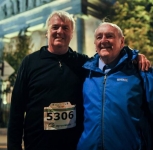 "When it's all said and done, it's a personal endeavor. It's an opportunity to do something that makes you feel better about yourself; it's an identity."

Another time. Another place. A stellar field of international superstar athletes gathered in the Mardyke in July 1982 to chase a world record. It was a big deal, but it was not uncommon.

For those of us of a certain age, the sporting landscape may have been dominated by the big sports then, much as now, but where fans of today might dip in and out of international success for boxers and rowers, back then it was more likely to be the runners and show jumpers who we turned to.

It was a golden era for Irish athletics. It was a time when the magical distance, the Mile, sparkled. And it was a common sight to see the world's great practitioners on these shores - John Walker, Sydney Maree, Steve Scott, Steve Ovett, Steve Cram - and the leading Irish athletes too, Coghlan, O'Sullivan, O'Mara . . . and local Longford legend Ray Flynn.

The week before the Mardyke, Flynn had been part of another red-hot line-up at a meet in Oslo. Scott and Walker were targeting a world record performance, while Flynn had a target of his own. "We were all chasing that night," Flynn recalls of the Oslo race. Two weeks earlier he had run on the same track and had come agonisingly close to going under three minutes and 50 seconds. He knew that on the right night, with the right conditions, he could be the first Irishman to break that elusive 3:50 barrier.

"There were places you raced that were fast and you went there to run fast and you were wired for it, and it was all you thought about, and that's what we did. We were just machines. Just running. It was all we knew how to do."