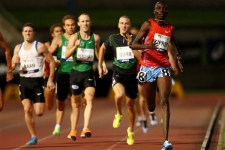 OSLO, Norway – Once again a strong focus at the ExxonMobil Bislett Games on 7 June will be the traditional "Dream Mile" when the Samsung Diamond League series lands in Oslo for its fifth stop of 2012.

The event’s list of winners reflects the recent history of middle distance running and illustrates why the race attracts the worldwide interest that it so richly deserves. Previous winners John Walker, Sebastian Coe, Steve Ovett, Steve Cram, Noureddine Morceli and Hicham El Guerrouj are names that are synonymous with sport at its most elite level. Indeed the British trio of Coe, Ovett and Cram all broke the World record contesting the "Dream Mile".

Again a top quality field has been assembled, headed by last year’s winner, the reigning Olympic & World champion Asbel Kiprop of Kenya. Kiprop is this year looking to emulate Coe who managed to successfully defend his Olympic 1500m crown some 28 years ago. Kiprop has already shown that he is very well prepared by running 1:45.91 for 800m during the Australian summer and has recently established a new personal best of 3:29.78 in Doha.

The field will also include World Indoor champion Abdelaati Iguider of Morocco, former World 1500m champion Youssef Saad Kamel of Bahrain and the current European 800m Champion Marcin Lewdowski of Poland. The depth of the competition is as one expects in the Dream Mile with Hailu Mekonnen (Ethiopia), Daniel Kipchirchir Komen and Andy Baddeley of Great Britain all having personal bests under 3:50 for the four laps, whilst Kiprop and the Morrocans Amine Laalou and Iguider have all broken 3:30 for the 1500m.