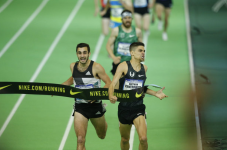 Robby Andrews has one of the best kicks in the trade, and Andrews had it loaded up.

He came wide off the last turn of the men's 1500 meter final in full sprint mode, and passed Matthew Centrowitz for the lead as the runners bore down on the finish line.

Centrowitz used one last surge to retake the lead just steps from the line in the USA Indoor Track & Field Championships Saturday in the Oregon Convention Center.