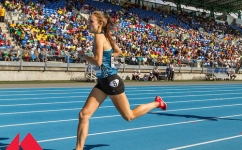 Moments after running a sensational 4:07.05 in the women’s professional 1500m field on Saturday at the adidas Grand Prix in New York, Alexa Efraimson, who is finishing her junior year at Camas High School in Washington state, said she was considering turning pro as a senior. If she did, Efraimson would take the same path blazed with such success by Mary Cain.

Efraimson, 17, struggled to catch her breath at Icahn Stadium after placing 10th in the second-fastest 1500m time ever by a high school girl. Only Cain’s 4:04.62 last year, during her junior year at Bronxville High in New York, is faster. Cain, 18, coached by Alberto Salazar since the fall of 2012, became a Nike-sponsored professional in the fall of 2013 and continues to train with Salazar’s Nike Oregon Project. She is graduating high school next week.

When asked in an interview if she expected to have a “regular senior year” at Camas High, Efraimson, who lives about a half-hour drive from Portland in southwest Washington, said, “I don’t know yet.”