Greatest College Athlete of All Time? Cheserek Has 17 National Titles including Indoor Mile 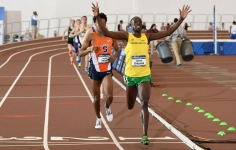 The University of Oregon senior has climbed to second on the list of collegiate champions.

Edward Cheserek of the University of Oregon won two events at the NCAA Indoor Track & Field Championships on March 10 and 11 in College Station, Texas, bringing his national title total to 17.

On the first day of the meet, Cheserek won the 5000 meters by more than two seconds in 13:41.20. The next day, he won the 3000 meters, finishing in 7:55.91 and outkicking Justyn Knight of Syracuse, who was second in 7:56.21. Cheserek could have won a third event at the meet, the Mile, but he was upset by Josh Kerr of the University of New Mexico and finished second in a slow, tactical race.

Combined with legs on Oregon’s victorious distance medley relay teams in 2015 and 2016, Cheserek has now amassed 15 individual and two relay titles to date, the most of any track athlete in NCAA Division I history. Across all sports, he now trails only swimmer Jenny Thompson, who won nine individual and 10 relay events during her career at Stanford.