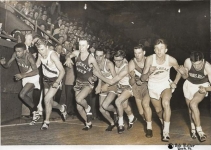 Former state record holder: “The Mile that I started running at West York was always my favorite event. That race developed my outlook on success — run hard, long and every day."

Time continues to pass, but Fred Kerr’s running legacy will forever live on.

More than 50 years removed from his last competition, Kerr is now being recognized alongside the state’s all-time greats upon his induction into the Pennsylvania High School Track & Field Hall of Fame this Saturday.

From there, Kerr went on to compete at Penn State University as a member of both the track and cross country teams. While at PSU, Kerr earned All-American honors for his sophomore and junior seasons.

Following his final competitive running with the U.S. Army squad in 1961, Kerr’s employment at Grove Manufacturing brought he and his family to Greencastle from 1973-87.