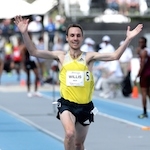 "It shows that the 5000m training I've been doing hasn't impacted on the shorter distance. If anything, it probably helps it; I'm very happy.''

Nick Willis is ''stoked'' at achieving a ''huge career bucket list item'' by cracking the 3 minute-50 second Mile barrier in a confidence-boosting performance before next month's Commonwealth Games.

Willis bettered his previous PR set six years ago when he ran 3min, 50.66 sec at the Prefontaine Classic in Eugene, Oregon, in 2008. Wednesday's Dream Mile scorcher was just 0.75sec outside the New Zealand Mile record of 3min 49.08sec, set by Sir John Walker at the Bislett Games in 1982 - a year before Willis was born.