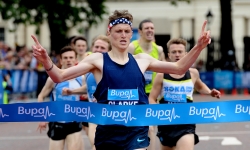 Adam Clarke and Racheal Bamford were the winners of the British Mile Championships at Sunday’s Bupa Westminster Mile, while David Weir broke the wheelchair world road Mile record when completing a hat-trick of victories on the London course.

Clarke, who was running his first Mile over any surface, pushed on after halfway to win impressively in 4:05.

The runner who was 15th on that day but otherwise usually has the measure of his training partner from St Mary’s, Jonny Hay, finished fast for second in 4:06. Ben Coldray was third in 4:07.

The women’s race was surprisingly won by steeplechaser Bamford, who sprinted past Mile specialists Charlene Thomas and Hannah England in the last 50 metres to win in 4:39 from Thomas’s 4:40 and England’s 4:41.