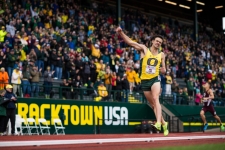 The Dow Wilson Inspirational Award is one of the most coveted accolades a male Oregon track and field athlete can receive. It’s given annually to the team member who has proven to be inspirational and tenacious through hard work and leadership. Of all the story lines and hard work put in by the men of Oregon this year, two runners stood out — and one of those men was Mac Fleet.

Fleet, a redshirt junior from San Diego, Calif., is seeded number 11 (3:45.08) in the 1500 meter run for the NCAA Track & Field Championships set to take place at Hayward Field this week, an impressive feat considering his two-year rebound from a navicular bone issue that could have potentially ended his career.

“When you look at what he did,” teammate Ben DeJarnette said, “the amount of time he was out with an injury that really showed no signs of getting better for two years, it speaks to his commitment and dedication that he was able to come back and now have what’s been an amazing season so far.”

Fleet, who has a Mile PR of 3:57, describes his rehabilitation process as humbling. He isn’t afraid to admit the depression that came with being sidelined from his passion for months on end.

“I would get healthy, try to run and end up hurting myself again,” he said. “Then I’d start the process all over. It was frustrating.”